Hornbills, Gibbons, and Wild Elephants, oh my! A Visit Inside of Khao Yai National Park, Thailand

In January, I spent three jam packed weeks in Thailand alongside 15 other Hunter College undergraduate and graduate students. We were there for a course in Thailand Elephants Studies led by our lab’s Principal Investigator, Josh. We started in the northern most part of Thailand in the Chiang Rai Province 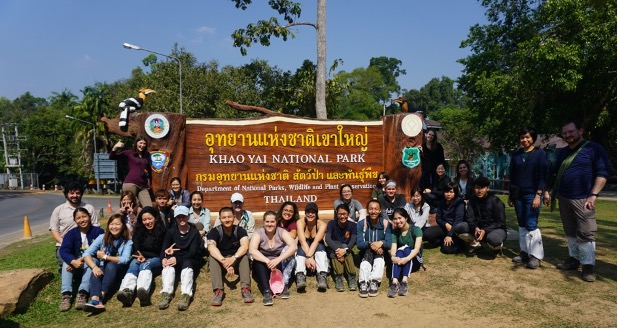 and traveled by van over 500 miles to Bangkok in the southern part of the country, with many stops (and animal sightings!) along the way. In the north, we visited four captive elephant facilities as well as stopped at National Parks, farmland, and even pitched a tent one night in Salakpra Wildlife Sanctuary.

As a group of young students, most who are studying animal behavior, we were very excited to learn about Thailand’s wildlife. For three days, we got to spend time in Khao Yai National Park. Khao Yai National Park was Thailand’s first National Park established in 1962. It encompasses 2,168 km2 and is the third largest National Park in Thailand. Khao Yai is located northeast of the city of Bangkok. As a World Heritage Site, Khao Yai is frequently visited for its beautiful landscape. The animals that we saw in the park include elephants, hornbills, gibbons, northern pig-tailed macaques, sambar deer, civet, and porcupine.

When we arrived at our accommodation in the park, we were 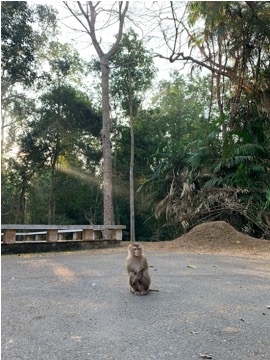 greeted by a swarm of macaques. Other than stealing food out of a student’s hand, they did not bother us much. Although, we did have to be very mindful in remembering to shut and lock the door behind us. The group before us apparently was not as lucky and had their rooms and belongings torn apart by the monkeys. 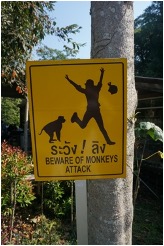 As animal behavior students, we knew better than to intentionally feed the macaques but there is a 500 Baht or $15 penalty if you do. Our first night was spent getting to know our fellow housemates, Thai Conservation Biology students from Mahidol University. 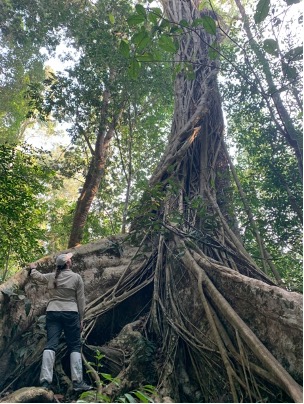 The next morning, we woke up bright and early to trek into the forest to learn about the biodiversity of the area and look for gibbons. There are 2 species of gibbon in Thailand: white-handed gibbons, and pileated gibbons. Our hike began and we had to be extra quiet to not disturb any of the wildlife. We were each given a different “forest flashcard” with a vocabulary word to learn and look for; mine was tree buttress, pictured to the left. Along our hike, we all started to smell something musky. About 20 steps later and we started to hear branches cracking and just like the scene in Jurassic Park, we stopped silent in our tracks. Somewhere close by there was a bull elephant, in musth. Musth is a heightened sexual period in male Asian elephants when they are prone to be more aggressive. An elephant in musth can be very dangerous, so we stopped and waited for an hour to see if the individual(s) would leave before we decided to turn around and try to find the gibbons the next day.

On our drive back to our accommodation, we drove up on a wild elephant crossing the road: the epitome of human elephant conflict in many Asian elephant home range countries. It is difficult to fully describe and put this surreal experience in words. I never pictured that I would see a wild elephant 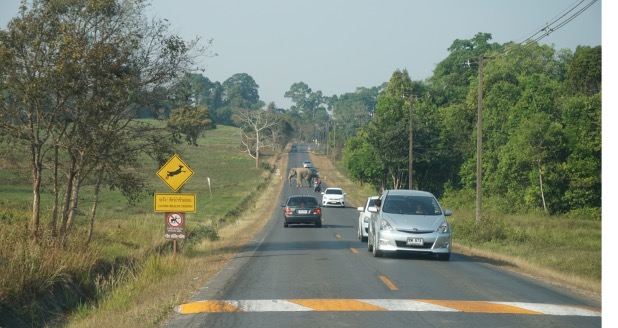 in person let alone in the actual way that the local people often experience elephants. It was humbling, shocking, and gave me a deeper appreciation for the conservation of wild things in wild places.

In the evening, we got to go spotlighting for wildlife in the park. For an entire hour we traversed the park looking for animals. 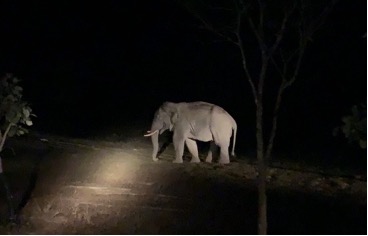 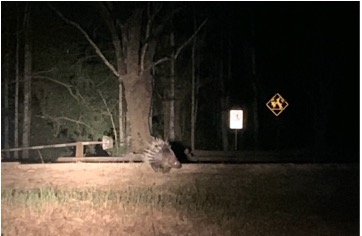 This is when we spotted a civet, several large porcupines, a fox, deer sparring with one another, and several individual elephants, again a surreal and incredible experience!

Some of the largest populations of hornbills in Thailand live in Khao Yai, so needless to say, we couldn’t leave the
park without doing some birdwatching. 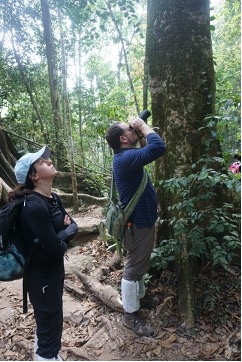 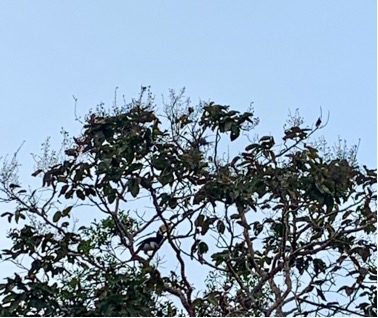 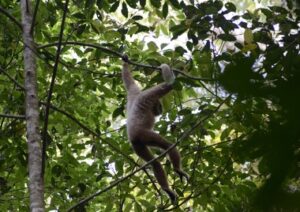 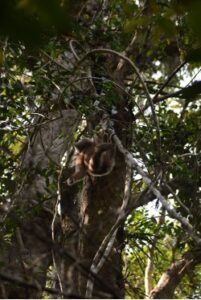 Another excursion we took was walking to the Haew Narok Waterfall, the highest waterfall in Khao Yai. As it was dry season in January, there was not a lot of water flowing over the fall, however the walk to the overlook itself is an adventure. With many, many steep steps and beautiful scenery, the walk to the waterfall is half of the fun! Unfortunately, this waterfall gained news coverage last year when 11 elephants fell over the ledge. 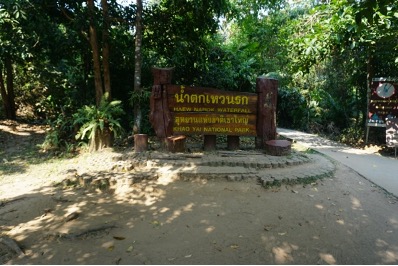 In closing, if you’re travelling to Thailand, I highly recommend visiting Khao Yai National Park. This National Park has plenty to offer and see that will remind you why it is crucial to conserve wild places and the animals that inhabit them. If you end up going, remember to purchase leech socks before hiking and always be aware of your surroundings. 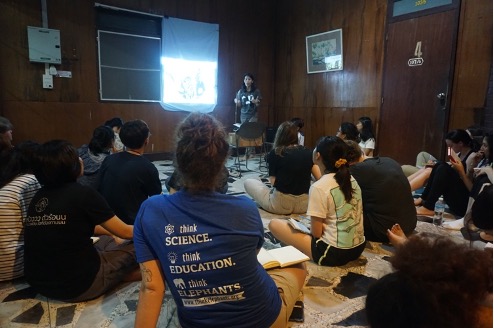